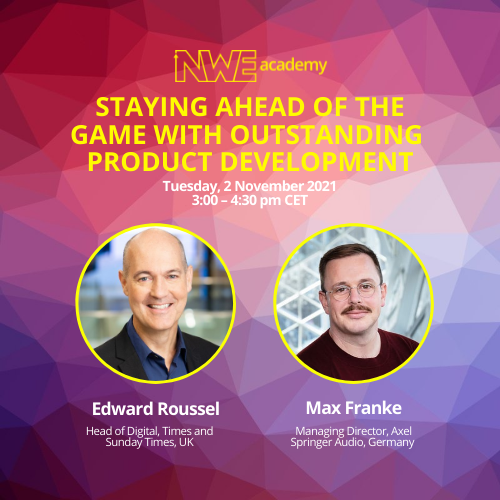 We are particularly pleased to welcome two new speakers from The Times and Axel Springer.

Edward and Max will give us valuable insights into their storytelling and audio strategies. You can find here more information about the programme, the other speakers and registration here.

Max Franke has already demonstrated his enthusiasm for audio already at Rolling Stone and Metal Hammer. As COO of Media Pioneer he has impressively proved that that premium audio is also a future-oriented business model.

Edward Roussel is Head of Digital, Times and Sunday Times, UK since May 2021.

Before he was Chief Innovation Officer at Dow Jones, responsible for identifying areas of new opportunity, with a focus on startups and relations with Silicon Valley companies. Edward joined Dow Jones in June 2013 as head of digital product development, overseeing projects including the redesign of The Wall Street Journal’s website and apps.

Before joining Dow Jones, Edward worked at the Telegraph Media Group in London for seven years. As Executive Editor, Digital, he headed the Telegraph’s website and mobile products, playing a central role in reorganizing the newsroom to place digital journalism at its core.

Edward worked at Bloomberg from 1992 to 2004, playing a key part in the company’s rapid editorial expansion. He oversaw global financial coverage, leading a team of more than 130 journalists. In earlier roles at Bloomberg, Edward was bureau chief in Brussels, Paris and London.